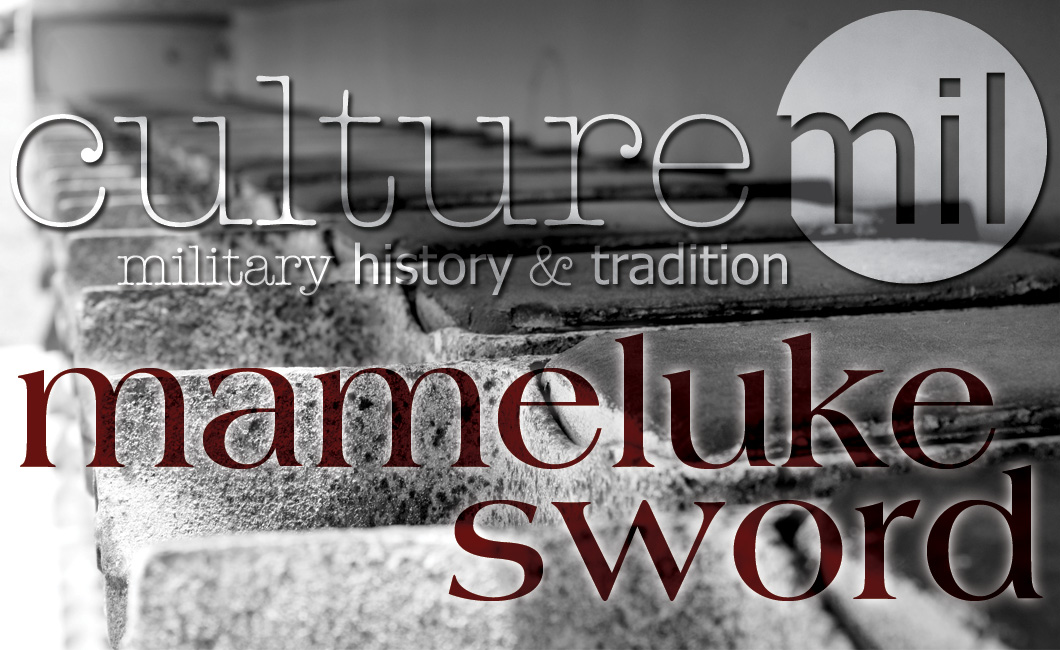 The Mameluke sword is cross-hilted, lightly curved and has a single edge. Colloquially affixed and similar to the Turkish sabers, the name Mameluke (derived from Mamluk meaning ‘slave’) refers to the shape of the hilt that originated in the Ottoman Empire. The Mamluks were young boys purchased predominately in Turkey or Caucasus. Freed men, they officered the military and served as the ruling class in Egypt. Overthrown by the Ottomans in 1517, the Mamluk nominally remained in power. Although their swords, during the crusades, more closely resembled the straight bladed European swords, their hilts were already slightly canted to the side and gradually evolved to the sword forms of the nomadic warriors, including the Mongol Golden Horde.

The Mamluks were integrated into an auxiliary unit of the French cavalry in the 18th century under Napoleon Bonaparte after he returned from his occupation in Egypt. Their valor not only impressed Napoleon but everyone else as well with their magnificence in battles during ensuing campaigns. Military fashion was set as officers sought to wear their exotic sabers. The British cavalry officers, who also encountered the Mamluks, unofficially wore their sabers until they became part of British general officers regulation in 1831.

In 1801, Pasha Yusuf declared war on the United States as he was dissatisfied with the tribute received to ensure the safety of unarmed merchant vessels traversing the Mediterranean in comparison to other Barbary powers. Naval actions along the Barbary, from 1801-1804, were significant.

The United States sent the U.S. Brig Argus to locate the exiled ruler, Pasha Hamet (Yusuf’s brother), in an attempt to seat him back on the throne, in the hopes of restoring diplomatic relations. Hamet had fled to Egypt to join the Mamluks with his Tripolitan followers.

William Eaton, a U.S. Navy Agent for the Barbary Regencies, proposed an alliance with Hamet to mount a land expedition against Tripoli in exchange for Hamet compensating the United States for its expenses during the war and a promise of no more tribute. Eaton, assisted by Midshipman George Mann, assembled an estimated 400 men,* including less than a dozen U.S. Marines commanded by First Lieutenant Presley Neville O’Bannon.

Beginning on March 8, 1805, the force marched over 500 miles* and arrived before Derna (Tripoli’s eastern-most fortified town) on April 25, 1805. Eaton called for a surrender which was summarily rejected. On April 27, 1805, supported by gunfire from three American ships, Eaton began his assault on the town whose garrison vastly outnumbered his own.* Through the redoubled efforts of O’Bannon and Mann, the town was taken. And on June 11, 1805, word came that Pasha Yusuf, whose cavalry was now counter-assaulting Eaton’s men, had agreed to end the war and Pasha Hamet was returned to rule.

Pasha Hamet presented O’Bannon with a Mameluke sword as a gesture of praise and respect for the Marines’ actions during the battle. Official regulation in April of 1825 adopted the Mameluke sword for Marine officers in honor of their heroism “to the shores of Tripoli” (added to the Marine’s Hymn) and at the Battle of Derna.

*Notes: No conclusive numbers or distance, although an extract from a letter to an officer on board U.S. Brig Argus, from Midshipman Pascal Paoli Peck, U.S. Navy, son of Colonel William Peck detailing exact numbers can be found at history.navy.mil//research/library/online-reading-room/title-list-alphabetically/b/battle-of-derna-27-april-1805-selected-naval-documents.html.