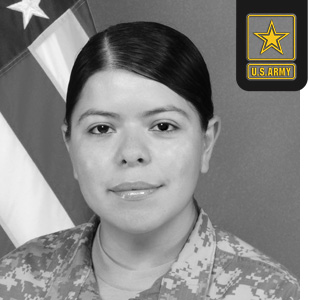 Rarely do you find a SFC that can say they accomplished this feat in seven years. But, in the case of SFC Garcia, rare is a word that unquestionably defines her. When asked to write this article, she popped in mind. My best friend, my first soldier, and one heck of an NCO!

On March 2, Erasmo and Maria Garcia gave birth to a beautiful, sweet little girl. Unbeknownst to them, this same little girl would achieve so much in so little time. SFC Garcia decided early on to become a police officer. She figured the Army would be an alternate route, “…just do four years and get out. It would be a great experience.” Four years turned into the present.

Was it easy for your parents to let you leave for the Army?

“My parents were totally against it. They raised me with great morals and independence. I didn’t want to be disrespectful so as best I could I explained to them I would go at the age of 18 regardless. I guess they saw how determined I was.”

She admits that she was scared when she first arrived at Fort Jackson. “I didn’t really know what to expect.” Like everyone else she had nine weeks to learn how to be a soldier. She added an additional 17 weeks to learn the MOS of a 25B. (Information System Operator-Analyst) And then she was off to Fort Hood, TX for her first duty station. Even with a little knowledge of how the Army operated she was still scared. For her it never got easier to arrive in a new place. There was always the anticipation and unknown. But she knew, “once you get over your fears you have this feeling of accomplishment.” This made it easier to believe that in spite of what came her way, she could deal with it. However, I don’t think she realized that would include being deployed within three months of arrival.

How was your experience at your first duty station?

“I literally had one month to get to know these same people I was deploying with. I got lucky. Half of my unit were higher ranking and were on their way out the door, while the other half were E-1 and E-2’s. I had an awesome NCOIC (SFC Tyler) that let me know the ins and out. He made sure I knew to go to school, get high PT scores, and go to as many boards as needed.”

With that advice she somehow found time to take correspondence courses online. She received her first PT patch and studied like crazy for soldier boards. Before leaving Iraq she was pinned PFC and went to a Soldier of the Month Board. These series of events sparked something in her; she was now inspired.

Returning to the states would be slightly disappointing though. With all the privates in the unit it was almost impossible to go to the board. She was promoted to E-4. Not wanting any idle time on her hands, she attended WLC (Warrior Leaders Course) in November of 2006. In December of 2006 she was finally afforded the opportunity to attend a promotion board.

How hard was it to go to the board after so long?

“It actually wasn’t difficult, I just had to review. As much as I studied, I knew most of the material. I think the frustrating part was that I went to the board while I was clearing.(Laughing) I wasn’t going to let the fact that I was going to Korea stop me [from going to the board].”

Upon arriving in Korea it dawned on her that this would be a different ball game. She no longer had the NCO’s volunteering information. Luckily she knew to plan ahead. Getting pinned E-5 (Sergeant) was her next step. As soon as she was pinned, she was signing up for college courses and trying to figure out when she could go back to the board for Staff Sergeant. She was told no numerous times, but being the person she is, she went straight to her regulations. Nothing was found to dispute her going. She made her request again, this time with supporting documentation, and she was on her way. 24 days after the board, she was pinned. Now with four years in the Service, she was a Staff Sergeant at the young age of 23. Yet again, she was looking for her next opportunity. Signing up for ALC (Advanced Leaders Course) only made the most sense. Before long, she PCS’d to her third duty station…Italy.

Was there still a frightened feeling going to your new duty station?

“Absolutely not. It’s Italy! I had a great experience. Met some great people and ate some great food. Plus I’m sure you were happy that I was there. You couldn’t wait to get there.” We both laugh at this fact because that was the first time I had ever been to Europe and I didn’t want to leave.

She finished her second phase of ALC in Italy and a year later attended SLC (Seniors Leaders Course) as a non promotable SSG. “Being so young, most of my peers looked at me as if I was nuts. People constantly questioned my age and sometimes it seemed as if they wanted to ask how I got here.” She pressed on and graduated from college. Two and a half years after arriving in Italy she was sent on orders to Fort Gordon. Platoon SGT would be her next move.

Were you prepared to train soldiers at an AIT level?

“Hmmm, I wanted my NCOER to have an arrangement of things on it. This definitely is a change. You move and learn at combat speed. Just when you thought you knew everything, something changes and you learn it before teaching the soldiers.”

Seven years in service and the SFC list was released. She was on it and pinned.

“I want service members to understand that, although it sounds as if my career has been easy, it took a lot out of me to make it where I am today. Sometimes there will be days when you just want to get out and do something else, but there are other days when you just love everything about the Army.”

What are your top 7 recommendations for any service member?

So now with so much under your belt, do you now know what you want to be when you grow up?

(With a smile on her face) “Yeah, Signal Corps CSM and then I’ll go for Sergeant Major of the Army if they let me!”

I honestly wouldn’t be surprised!