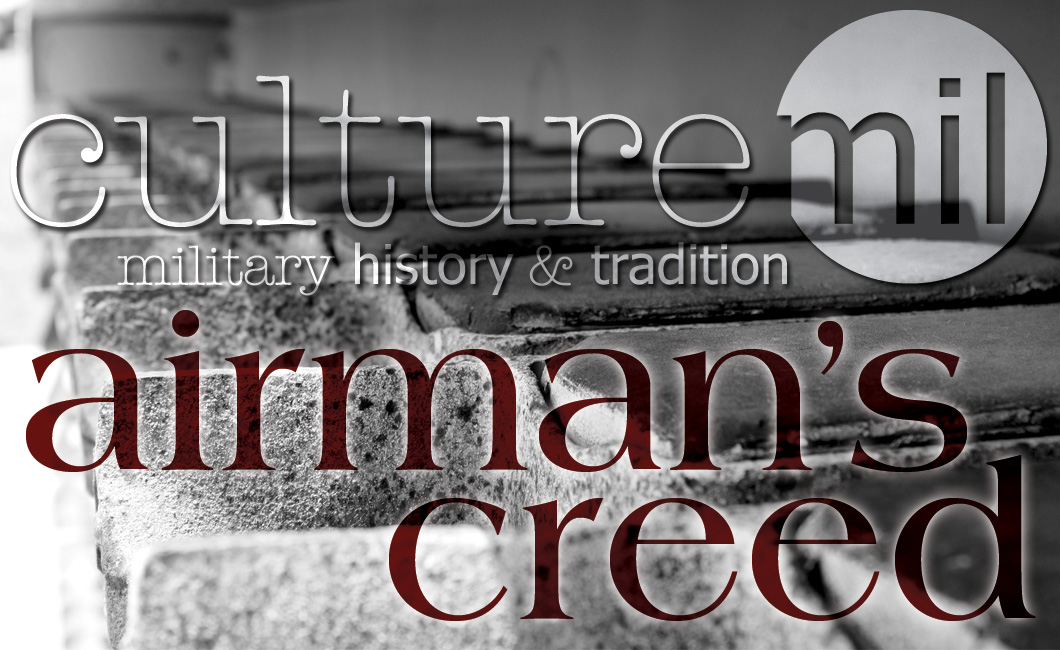 I am an American Airman.
I am a Warrior.
I have answered my Nation’s call.

I am an American Airman.
My mission is to Fly, Fight, and Win.
I am faithful to a Proud Heritage,
A Tradition of Honor,
And a Legacy of Valor.

I am an American Airman.
Guardian of Freedom and Justice,
My Nation’s Sword and Shield,
Its Sentry and Avenger.
I defend my Country with my Life.

I am an American Airman.
Wingman, Leader, Warrior.
I will never leave an Airman behind,
I will never falter,
And I will not fail.

The Airman’s Creed was developed after a collaborative effort and extensive feedback from Airmen throughout the Air Force. It was released on April 25, 2007, by General Teed Michael Moseley, former USAF Chief of Staff.

Designed with the intent to reflect Airmen past, present and future, it represents the Air Force’s core values, heritage, culture and warrior ethos. In the words of General Moseley, “As Airmen, we have a unique warfighting perspective… We are Airmen Warriors – dedicated to flying, fighting, and winning. …one of my top priorities has been to reinvigorate the warrior ethos in every Airman of our Total Force. To me, our warrior ethos is the warfighting-focused culture, conviction, character, ethic, mindset, spirit, and soul we foster in all Airmen. It’s the pride in our heritage, the recognition that our Nation depends on us to dominate air, space and cyberspace…”

According to General Moseley’s letter, the Airman’s Creed is to replace all existing Air-Force related creeds with its warfighting ethos and fundamental beliefs captured within its hard-hitting lines. The Creed gives credit to all Airmen, a sense of ownership of a combatant organization, pride in service and what it means to be an Airman, a focus on the identity of a warfighting ethos spirit and deepens the Airman’s identity as warfighters and their warfighting heritage.