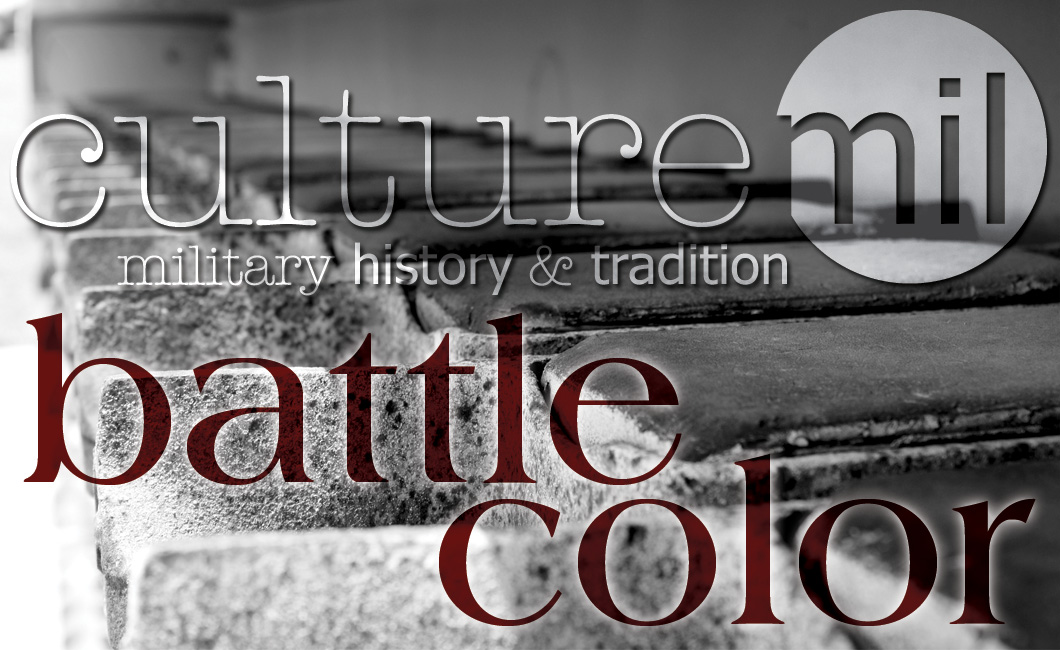 Written by Jenifer Chrisman on November 2, 2015.

Gold and scarlet became the official colors of the U.S. Marine Corps on April 18, 1925, by Marine Corps Order Number 4. However, it was not until January 18, 1939, that the colors were incorporated when a new standard was approved after a two-year study concerning both design and which units the flag should be issued to.

The official Battle Colors resides in the Marine Barracks, Washington, D.C. They bear the 54 authorized streamers, which represent U.S. and foreign unit awards, along with periods of service, campaigns and expeditions in which the marines have participated from the Revolutionary War through today. A duplicate of the colors reside in the Pentagon in the office of the Commandant of the Marine Corps.

Prior to their official designation, the Marines carried a variety of flags over their previous years or service. Little is known about which flags were carried during their earliest years, however, it is believed the Grand Union flag, and possibly the Rattlesnake flag, were carried ashore by Captain Samuel Nicholas’ battalion during the expedition of New Providence Island on March 3, 1776.

During the 1830s and 40s the flag was a white field with gold fringe bearing an anchor and eagle in the center with the legend “To the Shores of Tripoli” across the top. After the Mexican War the legend was revised to “From Tripoli to the Halls of Montezuma.” A flag similar to the national flag with a union containing an eagle perched on a shield of the United Stated above a half wreath encircled by 29 stars with a field of red and white strips also was carried during the Mexican and Civil Wars.

Briefly following World War I, battle honors were inscribed directly on the colors of a unit. This was quickly recognized as impractical due to limited space and the multiplicity of honors. In 1936 a Marine Corps Board recommended using the Army system of attaching streamers of the organization colors to the staff. Marine Corps Order No. 157 authorized this practice on November 3, 1939, which is still in use.

Today, the Battle Color Detachment, featuring the Silent Drill Platoon, the Color Guard and “The Commandant’s Own” The United States Marine Drum & Bugle Corps, celebrate the history and pride of the Marines with the Battle Color Ceremony. The 130-person Battle Color Detachment performs at military installations throughout the U.S., along with special events around the world, every year to demonstrate the professionalism, discipline and “Esprit de Corps” of the United States Marines.

The Silent Drill Platoon is a 24-person rifle unit who perform military drill and rifle inspection without verbal command. The Color Guard are entrusted with the National Ensign, carried by the Color Sergeant (who is considered the senior sergeant in the Marine Corps), and the official Battle Color. “The Commandant’s Own” The United States Marine Drum & Bugle Corps was formed to augment “The President’s Own” in November 1934. Traditional Buglers perform daily bugle calls at Marine Barracks, Washington, D.C., and standard “honors” for the fallen at Arlington National Cemetery, as well as perform as part of the Battle Color Detachment.

The Battle Color says it all… Marines. The Few. The Proud.

Current Award, Campaign, Service and Expeditionary Streamer Entitlement, to the Battle Colors of the Marine Corps