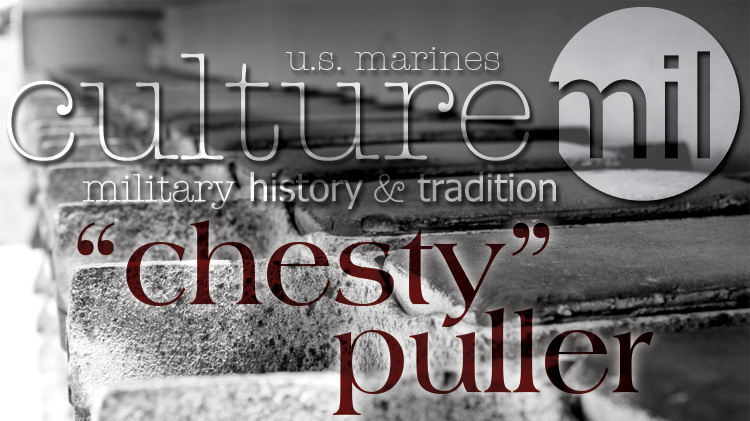 Born on June 26, 1898, in West Point, Virginia, Lewis Burwell “Chesty” Puller was inspired to join the service after listening to many tales of the military while growing up. Graduating high school just as the U.S entered World War I, he attended Virginial Military Institute before enlisting in the Marine Corps in 1918. But didn’t receive his commission until after the war had ended and was relegated to the reserves. Chesty resigned and reenlisted as an active-duty private to join a Marine-led gendarmerie (a military component with jurisdiction in civil law enforcement) during the occupation of Haiti. It took him three tries as a Marine officer candidate, but he finally regained his commission in 1924, flunking out of flight school two years later.

“Old breed? New breed? There’s not a damn bit of difference so long as it’s the Marine breed.”

A barrel-chested man, as his nickname implies, Chesty deployed to Nicaragua as a staff officer in 1928 as part of the U.S. effort to support President Adolfo Diaz’s government. He eventually made his mark commanding the only untethered Marine-led Guardia Nacional with his tenacious pursuit of César Augusto Sandino’s rebels. His numerous battles not only led to his nickname and a reputation for fearlessness, but also to two Navy Crosses.

Chesty spent the next ten months at the U.S. Army Infantry School at Fort Benning, Georgia, undergoing advanced training, before returning to a second tour of duty in Nicaragua in July of 1932. This led to one of his unit’s biggest victories of the conflict (at El Sauce) five days before the end of U.S. intervention.

“I’ve always believed that no officer’s life, regardless of rank, is of such great value to his country that he should seek safety in the rear … Officers should be forward with their men at the point of impact.”

Chesty served in China from 1933-36, where he led the Horse Marines in Beijing. Promoted to captain in February of 1936, he returned to the U.S. where he became a tactics instructor at the Basic School for the next three years, teaching lessons on “small wars.”

After being denied a seat at the U.S. Army Command and General Staff College at Fort Leavenworth, Kansas, Chesty was sent back to China in July of 1939. During his time there he was promoted to major in August of 1940 and had a ringside seat watching the German armies consolidate their hold on western Europe.

Reassigned to the newly established 1st Marine Division, Chesty again returned to the U.S. in August of 1941. He was given command of the 1st Battalion, 7th Marines (1/7) and lead his troops in the field after the attack on Pearl Harbor.

The 1/7 arrived on the Guadalcanal to reinforce the tenuous American beachhead on September 18, 1942. Chesty personally orchestrated the rescue of his surrounded battalion during the abortive Second Battle of Matanikau on September 27. He received his third Navy Cross for his role in the Battle of Henderson (October 24-26), where his battalion held the line against two Japanese regiments.

Pulled out in December of 1942 due to strength depletion, Chesty, now the regiments executive officer, and the 1/7 landed at Cape Gloucester on December 26, 1943, where he briefly commanded two battalions whose leaders were lost in hard fighting, winning him his fourth Navy Cross, before he was promoted to temporary colonel. In September of 1944 he was given command of the 1st Marines and assigned to seize Umurbrogol Ridge (the heart of the enemy’s heavily fortified position) in the assault on Peleliu. Chesty received harsh, and many believed unwarranted, criticism as more than half of his men were lost.

Chesty was pulled back into combat during the Korean War. The 1st Marine Division was hastily restored and he was handpicked by Major General O.P. Smith to lead his old regiment. In 1950, the 1st took action in an amphibious assault on Inchon (September 15), a street fight in Seoul (September 25-27) and the Chosin Reservoir campaign (November-December), where they not only had to combat wave after wave of human attacks but faced brutal but subzero temperatures as well (gordon.armymwr.com/culturemil/marines-tootsie-rolls/).

For his actions during the Chosin Reservoir campaign, Chesty not only received his fifth Navy Cross, one of only two service members to do so, but also was awarded the Army’s Distinguished Service Cross. In January of 1951 he was promoted to brigadier general.

“Son, when the Marine Corps wants you to have a wife, you will be issued one.”

Adding to the colorful figure he had already portrayed, Chesty spoke his mind to reporters about combat preparedness and his disenchantment during the Korean War after he returned home, creating some controversial headlines. One article characterized his message as, “savagely realistic message, full of bitterness for what has already happened in Korea and full of grave apprehension for the future.” Despite all this, he strongly advocated for tougher training and, surprisingly, it did not derail his career.

In July of 1954 Chesty was promoted to major general and given command of the 2nd Marine Division in North Carolina. He was given the honorary rank of lieutenant general after he was medically declared unfit, despite his determination to remain in the Corps, and was forced to retire in October of 1955 due to a stroke during an inspection.

Chesty retired to Saluda, Virginia. A semiautobiographical book about his life, Marine!: The Life of Chesty Puller, by Burke Davis, was published in 1962. His son, Lewis Puller Jr., a Marine infantry officer who suffered horrendous wounds during Vietnam, wrote Fortunate Son, a Pulitzer Prize-winning autobiography in tribute to Chesty.

“You were absolutely correct in making him salute you 100 times, lieutenant, but you know that an officer must return every salute he receives. Now return them all, and I will keep count.”

Chesty received numerous awards and decorations, including five (5) Navy Crosses, the Distinguished Service Cross, Legion of Merit, Purple Heart Medal, World War I Victory Medal, American Defense Service Medal, World War II Victory Medal, National Defense Service Medal and the Order of the Cloud and Banner with Special Cravat. In addition, but not limited to, the frigate USS Lewis B. Puller was named after him and the Marine’s mascot was named Chesty Pullerton (English purebred bulldog). For a full list of awards and decorations, visit https://special-ops.org/15019/chesty-puller-the-most-decorated-marine-in-history/.

Chesty died at the age of 73 on October 11, 1971, in Hampton, Virginia. He is buried next to his wife at Christchurch Parish Cemetery.

Having served as both an officer and in an enlisted capacity, Chesty led by example, forever earning the respect of those who served under him.