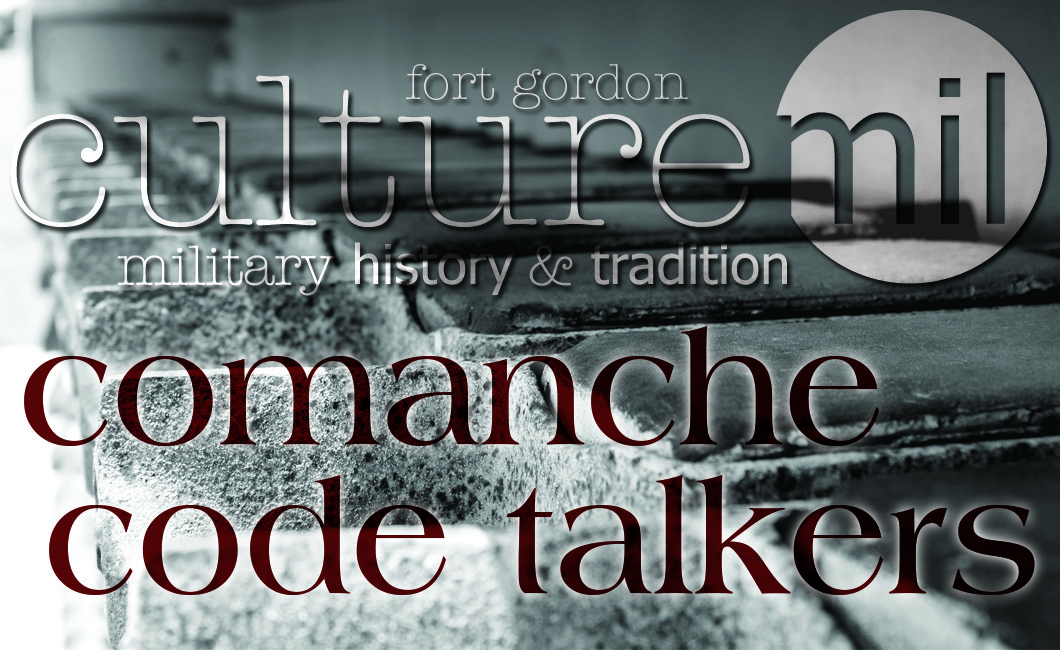 “It’s strange, but growing up as a child I was forbidden speak my native language at school. Later my country asked me to. My language helped win the war, and that makes me very proud. Very proud.”

Despite the brutal and systematic oppression of their people and the attempted eradication of their languages and cultures, during the course of World War II approximately 25,000 American Indians (17,000 during World War I) served in the armed forces. Of those men and women, a select few men were handpicked to serve as the Army’s Comanche Code Talkers. They blocked Japanese decoding of military information by dispatching messages in their tribal language. 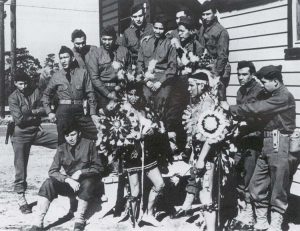 Aside from the Comanche, a total of thirty-three tribes were known to have members who served as Code Talkers. These tribes include the Apache, Cherokee, Chippewa-Oneida (also known as the Kiowa), Choctaw (the first tribesmen to ever be used as Code Talkers), Comanche, Crow, Hopi, Meskwaki, Navajo (first recruited by the Marines in 1942 and the most well know) and several Sioux nations. Between them they served in three separate theatres: North Africa, the Pacific and Europe.

Prior to the start of WWII, German and Japanese “scholars researched Native American languages by visiting the United States. As there was no written version of the Comanche language, its use was ideal. And while the language was used during WWI, an organized code wasn’t developed until WWII.

Given free rein to develop their code, with the understanding no one outside their group, including other Comanche, would have knowledge of it, the code was so successful it was never broken. Where it could take the military, using a machine, up to four hours to transmit and decode a single message, a Code Talker could decode the (same) message in under three minutes.

The lingo included 250 descriptors for geographical and military terms, as well as military technology, of which their language had no native words. They also used certain words to create an alphabet, such as “saddi” (dog) to represent the letter D.

Recruited in 1941 from the area around Lawton, Oklahoma, they arrived at Fort Benning, Georgia, from Dry Prong, Louisiana, on August 27, 1941. During this time, Lieutenant Keene formed an all-Comanche boxing team. The Comanche’s were, to everyone’s surprise, very good pugilists. The team became so popular they were given additional training time and they continued boxing as they moved around to continue their military training.

After their initial arrival at Fort Benning, the Code Talkers’ arrivals and departures didn’t correlate with the rest of the Division’s movements. They always arrived early to install communications and remained behind to collect wire and cable.

As part of the Fourth Division, they moved from Benning to Fort Jackson, South Carolina, on October 30, 1941. Just prior to the attack on Pearl Harbor, the Fourth returned to Fort Benning. After several more weeks of training they transferred to Camp Gordon, Georgia, on December 29, 1941. The Division continued to move around for additional training, proceeding to Carolina Maneuver Area on July 7, 1942. They returned to Camp Gordon on August 31, 1942, then on to Fort Dix, New Jersey, on April 12, 1943, where they undertook anti-aircraft training in nearby Massachusetts. On September 19, 1943, they moved to Camp Gordon Johnston, Florida, where they trained at II Corps Carrabelle Maneuvers, which included new methods of amphibious training with landing craft personnel (LCP) boats, as well as invasion training and how to swim in full gear.

In preparation of deployment, Division members were given a brief furlough. Many Native American Church prayer (peyote) meetings (as well as traditional blessings and Christian church prayer meetings) were held as tribal Service Members prepared to deploy. Blessed peyote buttons were given to many of the tribesmen to carry on their person, generally in a small, leather bag or bundle, for personal protection. Haddon Codynah said, “…I was given a piece of peyote that had been blessed to keep me from harm. I think all the others were given one too. It must have worked, for all of us came back home.”

In December of 1943, the 4th moved to the holding area at Fort Jackson, South Carolina, then on to Camp Kilmer, New Jersey, in January of 1944, for processing and inoculations. They were moved to New York, then back to Fort Dix where Albert Nahquaddy Jr., Anthony Tabbytite, and Ralph Wahnee were discharged. From New Jersey they boarded ship and arrived in Liverpool, England, at the end of January. During their stay in England, Morris Tabbyetchy was transferred to I-Corps for his cryptography skills, leaving only thirteen Code Talkers who landed on Utah Beach (Normandy) on June 6, 1944 (D-Day).

The Code Talkers were distributed throughout the 4th in pairs, their main task to lay and repair wire, as well as retrieve it as the troops advanced.

From June 6, 1944, to May 8, 1945, more than 15,000 miles of wire was laid by the wire platoon. They served in many major events, including the liberation of Paris, the Siegfried Line, Huertgen Forest, Battle of the Bulge and the liberation of concentration camps.

Although several of the Code Talkers were wounded in action, all of them made it home. They received many awards, including Purple Hearts, Congressional Gold Medals and Chevaliers of the National Order of Merit (French).