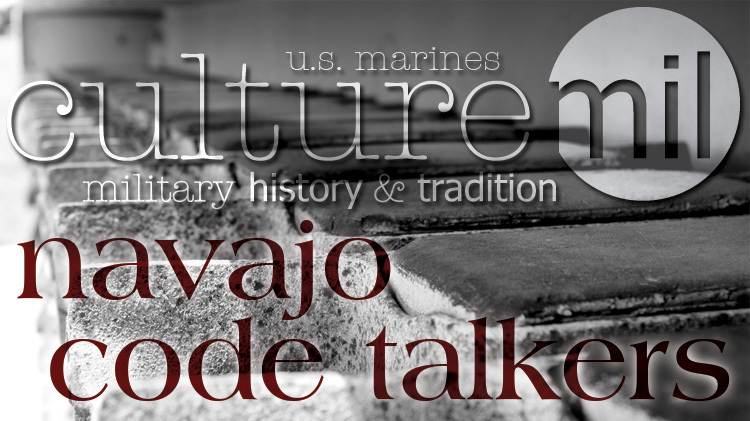 Written by Jenifer Chrisman on September 24, 2020. 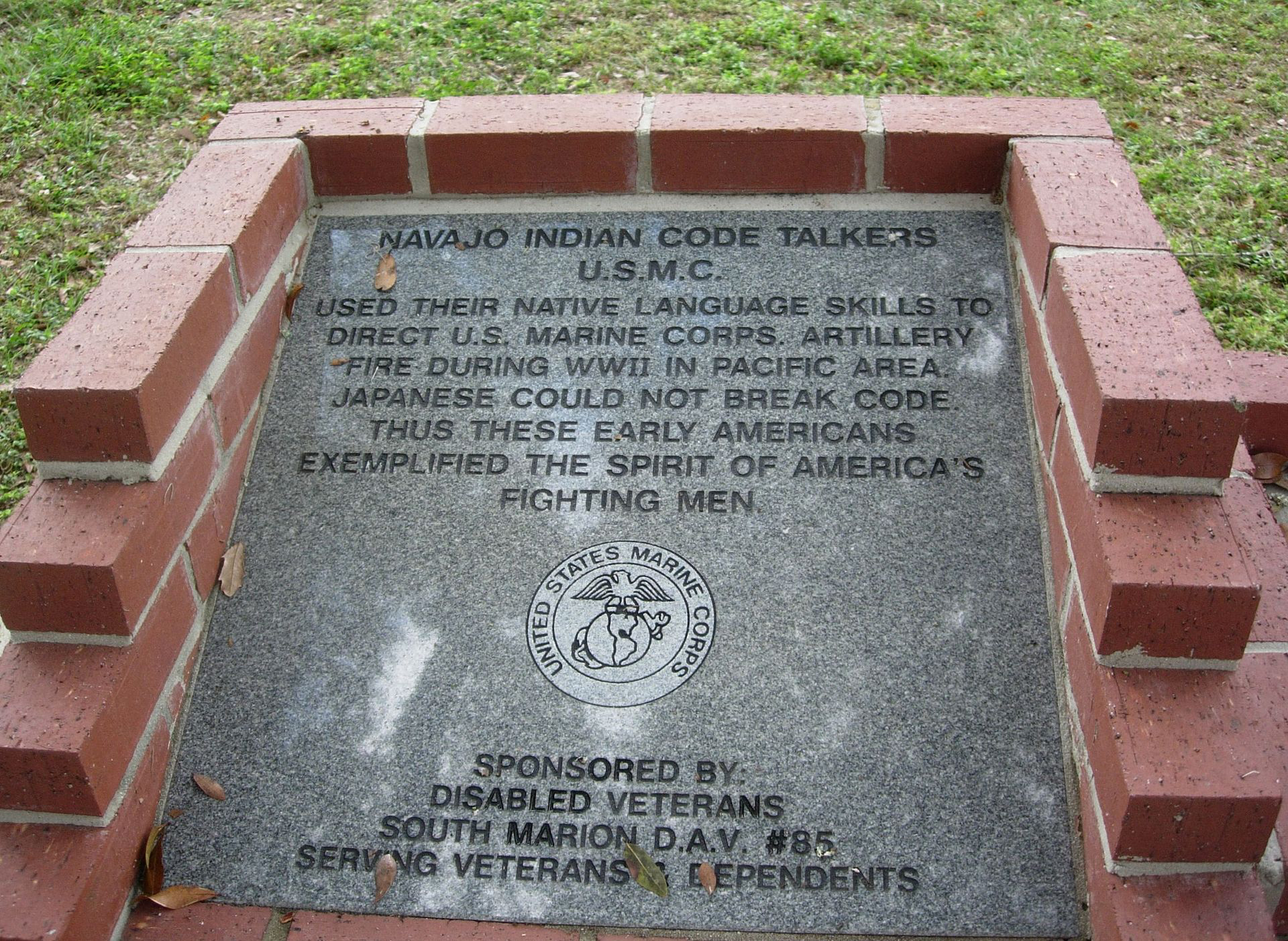 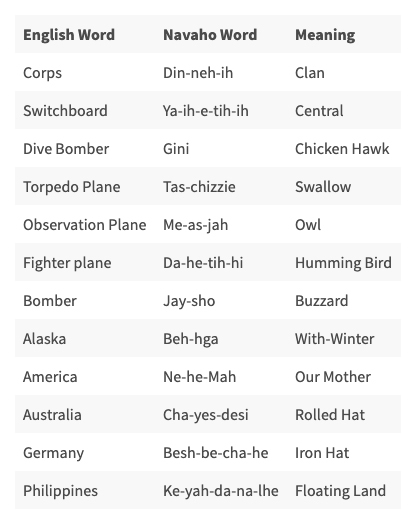 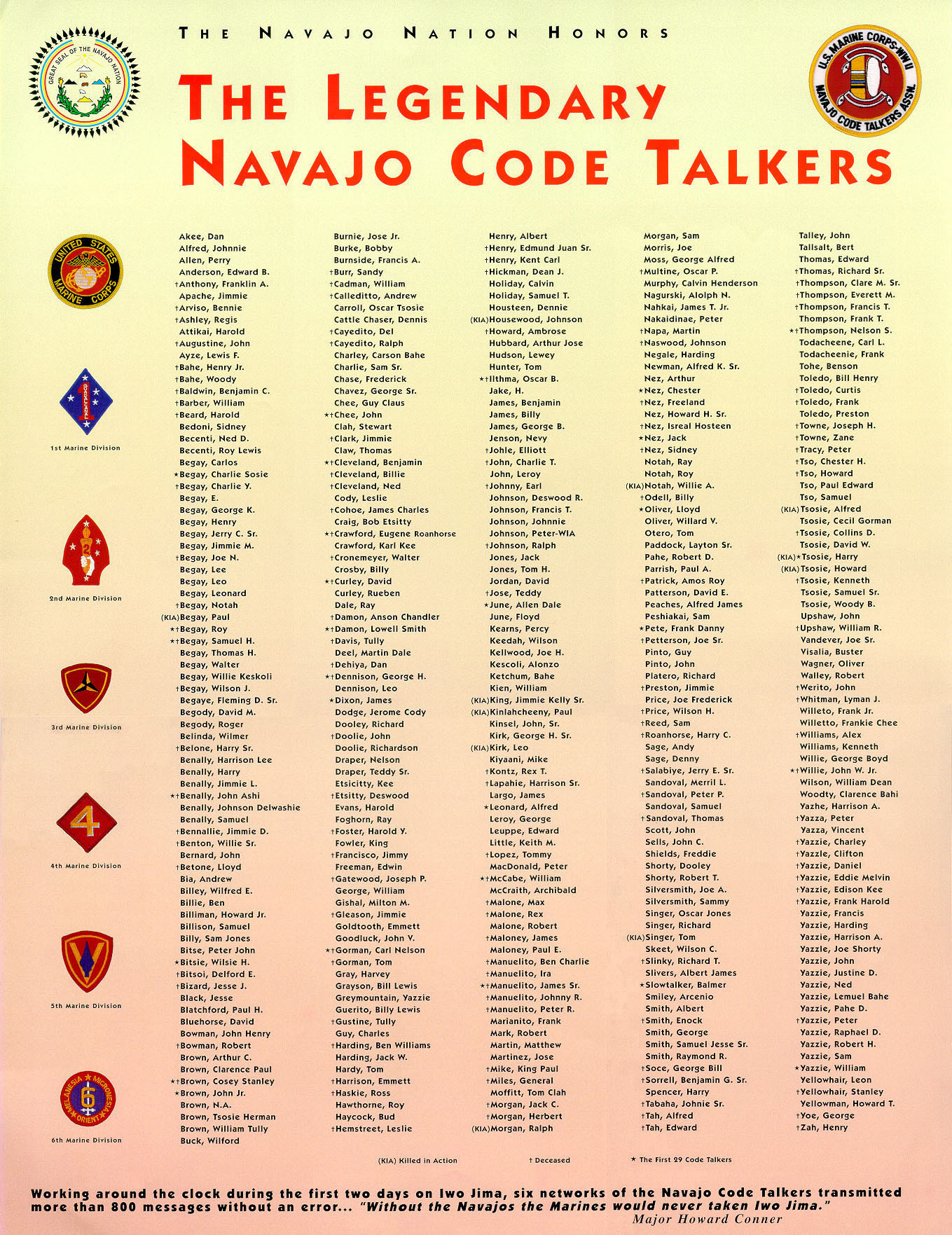 Despite the continued attempts to eradicate their languages and cultures, as well as the ongoing systematic and brutal oppression of their people, warriors from numerous American Indian tribes chose to serve their country. They enlisted in the military during both World Wars, many of them underage. Among the most famous were the Marine Corps’ Navajo code talkers.

After hearing about the success of the Choctaw telephone squad (original code talkers – WWI), in 1942, Philip Johnston suggested recruiting Navajo and other tribes to the Marines to help maintain communication secrecy. Johnston was the son of a missionary and a veteran of the first World War who grew up on a Navajo reservation.

Although there were objections, they received the go-ahead after viewing a demonstration of Navajo language being used to send messages. The demonstration was so successful the Marines recruited the first twenty-nine Navajo in just two weeks.

As per the stipulations, they met the normally required qualifications for enlistment, as well as strict English and Navajo linguistic qualifications. They arrived on May 5, 1942, in San Diego, California, where they underwent the standard seven-week basic training in military standard procedure and weapons use. From there they went to the Fleet Marine Training Center at Camp Elliott for radio operation instruction and message transmission.

Until 1849, when Lieutenant James H. Simpson published a word list in the Journal of a Military Reconnaissance, Navajo was an unwritten language made up of complex syntax without symbols or an alphabet. Early 20th century saw missionaries producing texts and grammars in Navajo, but each had their own spelling system. A standardization didn’t begin until the 1930s, when an alphabet (completed in 1939) and, later, Navajo language materials, were commissioned. The new alphabet was not popular with the Navajo, in part because they were angered over some of the policies set by John Collier (head of Indian Affairs and one of the two men who commissioned the materials). This left the Navajo, at its most fundamental, a still unwritten language

When the first twenty-nine Navajo code talkers created their original code, they modeled and developed the alphabet based on the Joint Army/Navy Phonetic Alphabet, using agreed upon English words to represent the letters. The Navajo, along with the Comanches, Hopis and Meskwakis, created what were known as Type One Codes. These were special codes based on their language, rather than conveying messages in everyday tribal language (Type Two Codes). The alphabet was created using animals the Navajo were familiar with, such as bear for B.

However, certain terms, tactics, instruments of warfare and concepts were considered too long to spell out during combat and so were given uniquely descriptive nomenclature. To enable the Navajo to develop these special words or concepts, they were given picture charts of the items that needed to be named. For example, a tank has a hard shell and moves so it became the Navajo word for turtle (wakaree´e), and a colonel wears the insignia of a silver eagle, which became the word used for that rank (atsah-besh-le-gai).

They demonstrated their ability to memorize and send coded messages under adverse conditions and fast-moving positions. And to ensure such messages remained secret, they were given verbal messages in English, which they translated to Navajo without ever writing down. Only after the message was received by the code talker on the other end and was translated back to English was it entered in the message logbook.

Such was their success that 200 additional Navajos were recommended for recruitment and the Marines established a Code Talking school. The school included extensive training in communications and memorizing code after basic was completed.

The code talkers did far more than speak over a phone or hand-held radio. Training and knowledge included how to operate both wire and radio equipment, which they often carried it on their backs, as well as how to set up and maintain electronic communication wires or lines.

The code, meanwhile, continued to evolve. Monitoring by a cryptographer determined the code might be broken due to repetitions using the standard twenty-six letter alphabet to spell words not in Navajo vocabulary. The alphabet grew to forty-four terms and the original vocabulary (211) expanded to 411 terms.

There were some obstacles to overcome. Lack of military terminology, along with code talkers being trained at different times and working in different locations, caused difficulties as dialects and modified vocabularies sprang up. To offset these problems, divisions started exchanging the code talkers in an attempt to standardize the code. However, it wasn’t until after Iwo Jima that it was recommended all code talkers receive quarterly training sessions to review standard Navajo military code and brush up on radio procedures and headings. In spite of the drawbacks, the level of secrecy they were able to employ and their versatility provided “the simplest, fastest, and most reliable means” (Captain Ralph J. Sturkey) of communication.

The program was and remained highly classified throughout the war up until 1968. They received no fanfare or warm welcomes from the general populance when they returned home as they were sworn to secrecy about the existence of the code. Only a very few knew the impact their unbreakable code made on behalf of the United States.

On December 21, 2000, “Honoring the Code Talkers Act,” introduced by Senator Jeff Bingaman of New Mexico, was signed into law. The Act, on behalf of Congress, authorized the President to award a gold medal to each of the original twenty-nine Navajo code talkers and a silver medal to each of the other men who later qualified for that position. Today, they are pop culture, American history icons.

To learn more about or view the Navajo Code Talker Dictionary, visit: history.navy.mil/research/library/online-reading-room/title-list-alphabetically/n/navajo-code-talker-dictionary.html.