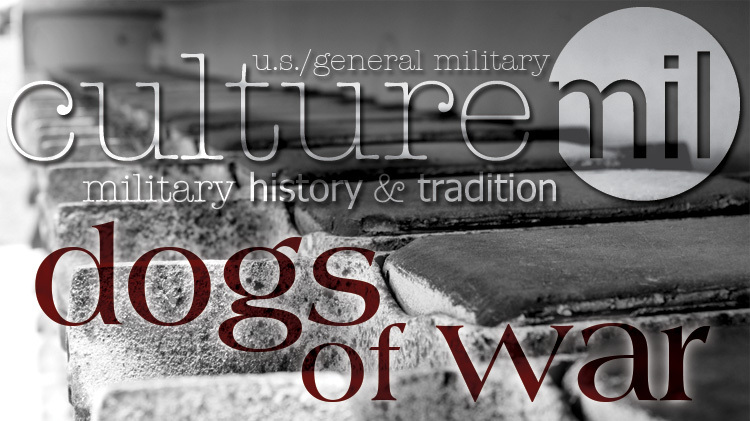 My eyes are your eyes, to watch and protect you and yours.

My ears are your ears, to hear and detect evil minds in the dark.

My nose is your nose, to scent the invader of your domain.

And so you may live, my life is also yours.

Dogs have a long history of serving in and with the military. Their participation can be definitively traced as far back as the Iron Age (generally thought to be between 1200-600 BC) to at least one battle in the kingdom of Lydia, Greece. And ancient scribes, such as Homer, Herodotus and Polyaenus, recorded the use of dogs of war during Xerxes’ invasion of Greece, as well as the Spartan sieges.

So why are dogs trained to assist the military and public safety? Not only are dogs genuine, accepting, trustworthy, dependable and good listeners, their olfactory and visual sensory abilities far supersede human capabilities. Dogs have up to 300 million olfactory receptors in their noses, humans approximately six million, and the portion of the brain dedicated to smell is forty times larger. Also, they can often go places where humans cannot and can intimidate and/or subdue more quickly, generally through non-lethal force.

Past centuries have seen dogs in many rolls, including drawing fire to expose enemy positions, sentry, scout, patrol, messenger, mine, casualty, tunnel and explosive detection. Today they are humanely trained for roles that utilize their skills in the best possible way, and to do the most good.

When the military began training dogs in earnest, March 13, 1942, they originally accepted and worked with thirty breeds. Experience drove the list down to five: Belgian Sheep Dogs, Doberman Pinschers, Farm Collies (short coat), German Shepherds and Giant Schnauzers, plus Alaskan Malamutes and Huskies as sled dogs for Arctic duty. Today, the most commonly trained dogs are divided into specific categories, with some crossover and others used as suited:

SINGLE-PURPOSE DOGS* are trained either to locate explosives or locate drugs, so there is no confusion on the handler’s part:

Approximately 1,600 active working dogs are managed by the DoD. While many are military working dogs (MWD), others are umbrellaed to other federal entities such as the Transportation Security Administration (TSA) and Customs and Border Patrol (CBP).

The dogs trained by the DoD are rarely registered or pedigreed, making them heartier, less prone to problems and have a higher functionality. And unless otherwise noted, all U.S. Military dogs are trained by the 341st Military Working Dog Training Squadron, Lackland AFB, TX.

While these dogs don’t have a formal rank structure, traditionally they are non-commissioned officers. They outrank their handlers, who are generally E3s and E4s. This is to help ensure the dogs are treated with respect.

Although many remain unnamed and unknown to all but their trainers and handlers, some have set themselves apart. Sergeant Stubby, who came on the scene before the formalization of MWDs, was the beloved mutt and mascot of the 102nd Infantry Regiment during World War I (https://gordon.armymwr.com/fyi/culturemil/sergeant-stubby-hero-dog-wwi-brave-stray). Since the formalization, Cairo, a Belgian Malinois, was involved in the raid that ended with Osama bin Laden’s death. And Conan, also a Belgian Malinois, hunted down ISIS leader Abu Bakr al-Baghdadi.

These dogs, and the many who have served in the military throughout history, are an integral part of military and as deserving of respect as their human counterparts.