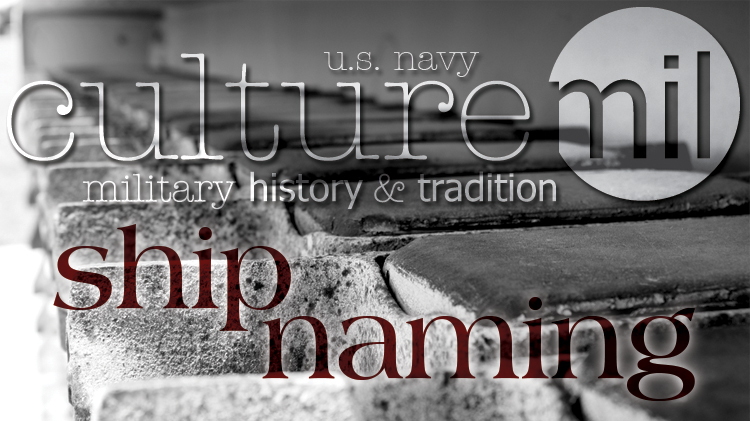 “You can’t cross the sea merely by standing and staring at the water.”

Prior to 1819, Continental and early federal Navy ships derived their names from a variety of sources. From full battleships to schooners, they ran a gamut of personal names, traits and locations:

Congress formally placed the Secretary of the Navy as responsible for assigning names to Navy ships on March 3, 1819. The act stated that:

An act on June 12, 1858, added “steamship” to the nomenclature and officially defined ship “classes” by the number of their guns:

To help expedite the naming decisions, the Navy History and Heritage Command (NHHC) compiles a list of primary and alternate recommendations each year. These recommendations are based on research into the history of the Navy, as well as suggestions submitted by the public, service members and Navy veterans. The names encompass types of ships being built, names borne by previous ships that distinguished themselves; the distribution of geographic names of ships of the fleet; names recommended by individuals and groups; and names of national figures, naval leaders and deceased members of the Navy and Marine Corps who have been honored for extraordinary achievement or heroism.

The compiled list is sent up the chain of command by way of the Chief of Naval Operations. He in turn signs a memorandum with the recommendations for the building program’s current year and passes it on the Secretary of the Navy. After due deliberation and taking the memorandum into account, along with his own thoughts on the matter and any recommendations he personally receives, he then selects and announces the new names.

The Secretary of the Navy also selects and invites each sponsor (the person who will be christening the ship) for the ship naming ceremony. Ships names are generally assigned before they are christened. When the ship is being named after an individual, the oldest living female relative is sought to perform the role. For all other ship names, the wives of public officials or senior naval officers are customarily honored with the task.

Ship naming has evolved over time but remains in integral part of the Navy – past, present and future. Each name makes its own mark, leaving a tangible trace upon naval history.