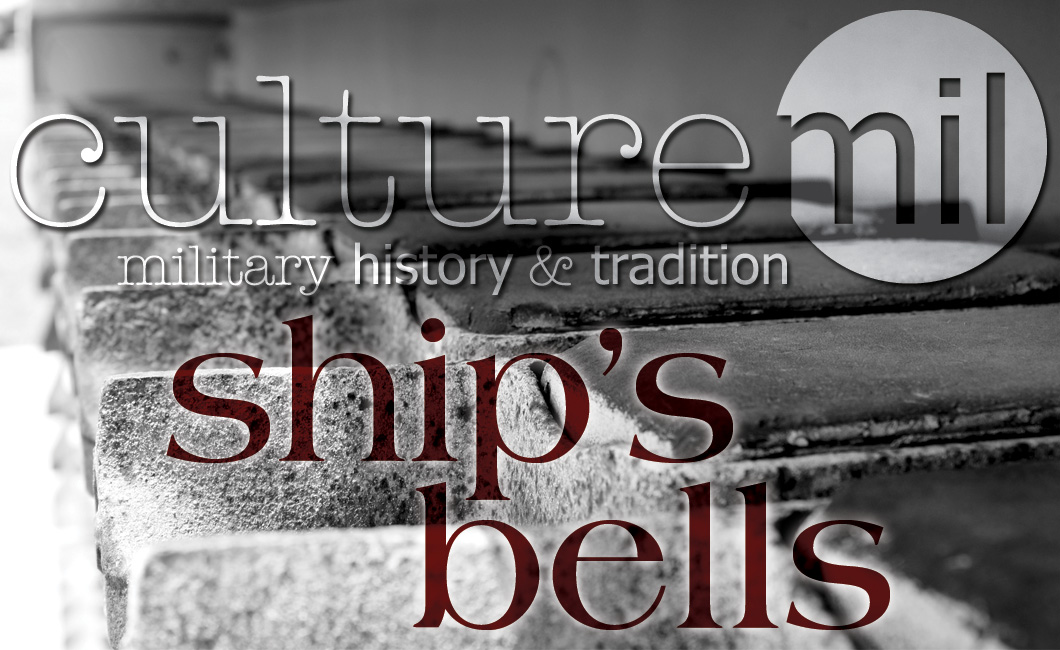 A centuries-long tradition of water-going fleets, bells play an important part in the readiness and routine of a ship. Both functional and ceremonial, their timekeeping, sounding the alarm and signaling are a significant symbol and a tangible, history-rich part of the United States Navy.

Developed in the Bronze Age, bells were used by Christians to regulate daily activity, signal services and make announcements. They were later used on ships for timekeeping, with the earliest mention of a shipboard bell recorded around 1485 on the British ship Grace Dieu. During the Revolutionary War, America adopted the British Royal Navy’s use of bells on their own ships.

Timekeeping* – Prior to the chronometer, a half-hourglass was used to measure time aboard a ship at sea. When the sand ran out of the top glass it was turned and a bell was struck, signaling the function had been performed. It became tradition to ring the bell once for the first half hour, twice for the second half hour and on through eight bells, marking the completion of the four-hour watch.

Alarms – The bell was essential to a ship’s emergency alarm system. The bell is rapidly rung for at least five seconds, then once (forward), twice (amidships) or three times (aft) to indicate the location of the emergency.

Safety and Communication – Customarily used as a signal to warn other vessels during fog or poor visibility, British Naval Regulations mandated their use in 1858 for such purposes. Maritime law now requires all ships have an efficient bell.

Ceremonies and Events – The bell is used to signal the arrival or departure of an important person or at a naval command transition, which is commonly held aboard the command’s vessel.

Decommissions – Among many artifacts, the bell is removed when the ship has finished serving its career and is decommissioned. Preserved by the Naval History and Heritage Command, these artifacts may be loaned for such purposes as a naval command with a historical mission or functional connection, new namesake ship or museums or institutions displaying naval history. However, they remain the property of the Department of the Navy and the U.S. Government.

Navy ship’s bells serve as a powerful reminder of the heritage of the U.S. Navy and the courage, honor and commitment of its Service Members. They are deeply ingrained part of its history and a source of inspiration, as well as an acknowledgement of their many accomplishments.