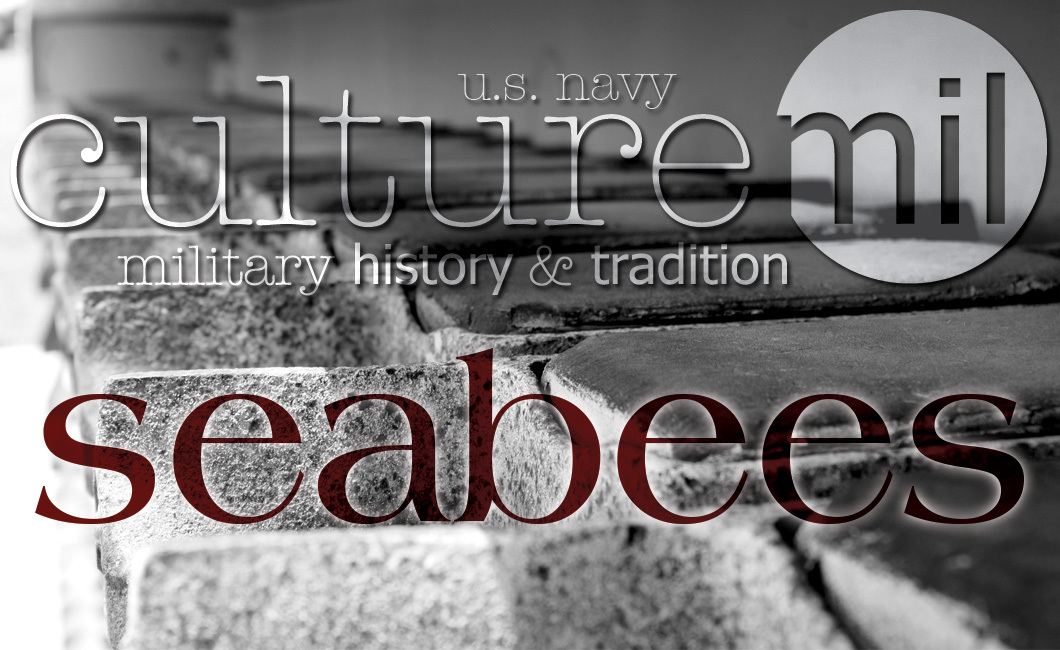 “The difficult we do immediately; the impossible takes – eh – a little bit longer.”

Realizing civilian contractors would not be a viable option during war time, International law precluding them from resisting enemy attack or they could be executed as guerrillas, Rear Admiral Ben Moreell submitted a request to create a specialized unit of Navy and Marines on December 28, 1941. He was granted authority on January 5, 1943, and the original Naval Construction Battalion was formed in Davisville, Rhode Island.

Headed to Bora Bora, the Battalion deployed its first unit (296 men) only twelve days later, on January 17, 1942. They were officially named Seabees on March 5 of that year by the Department of the Navy, personally given the motto Construmus Batumius (We Build, We Fight) by Admiral Moreell, and a logo, a fighting bee, was created for them by a Rhode Islander at Davisville.

The Seabees was made up of highly skilled and experienced craftsman in most any building or construction trade, including carpenters, electricians, equipment operators and plumbers, and able to engages in both combat and construction. From Midway Island to Guadalcanal to the Normandy Invasion, they participated in every major amphibious assault. They not only earned a reputation for their ingenuity, using whatever materials they could find to complete a job, they fought and built in over 400 locations and had more than 325,000 men serving in over sixty skilled trades during World War II.

Reestablished during the Korean conflict on August 6, 1951, their jobs included far more than amphibious operations. Given a “K” designation K-2 at Taegu or K-18 at Kimbo, they were assigned to numerous detachments.

During this time, after civilian contractors said it couldn’t be done, the Seabees began arriving at Cubi Point in the Philippines, chosen to be a new naval air station. Arriving first were MCB-3 on October 2, 1951, followed by MCD-5 on November 5. MCB-2, -7, -9, -11 and -13 eventually arrived over the next five years. Matching their skills, training and wits against the forbidding Zambales Mountains and maze of jungles, the Seabees cut one of the mountains in half to create a two-mile long runway. One of the largest earthmoving construction projects in the world, it was equivalent the construction of the Panama Canal.

As participants in Operation “Deep Freeze,” the Seabees began deploying yearly to Antarctica to build and expand scientific bases beginning in 1955. In their first year there they constructed a 6,000-foot ice runway on McMurdo Sound, as well as building underground storage, laboratories, snow-compacted roads, living areas and, most notable, the first nuclear power plant over the next several years.

From World War II through modern times, the Seabees have played a major role in the Global War on Terrorism. Although more than two-thirds of today’s Seabees are reservists, those on active duty are ready to deploy on short notice and their “Can Do” philosophy is a timeless testament to their role in U.S. military history.