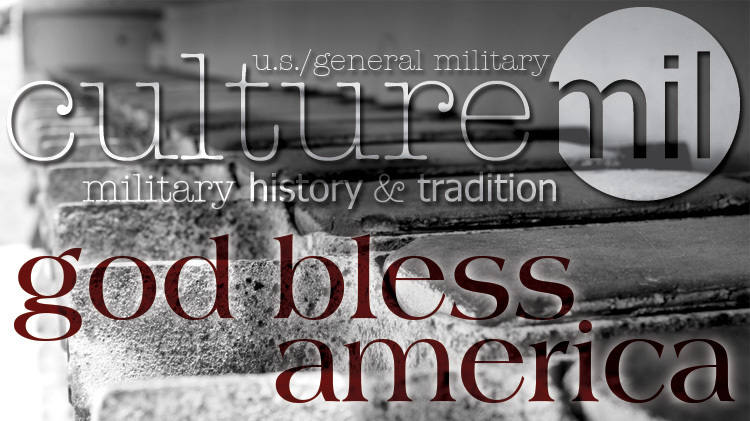 Disclaimer: The views and opinions expressed in this article are a factual accounting of the history of the song “God Bless America.” They are not in any way a reflection of the official policy, position or opinions of the United States Army or the Directorate of Family and Morale, Welfare & Recreation.

Stand beside her and guide her

Through the night with the light from above

Stand beside her and guide her

Through the night with the light from above

Plagued by a series of racial and religious controversies, “God Bless America” started out with all the best intentions and ended up inspiring a nation.

Irving Berlin, born Israel Baline on May 11, 1888, in Tyumen, Russia, fled with his family to escape the persecution of Jewish families in Russia. He arrived in New York at the age of five.

Baline worked as a street singer as a teen and published his first lyrics, “Marie From Sunny Italy,” in 1907. His name was misspelled as “I. Berlin” on the sheet music, a name which he decided to keep, reinventing himself as Irving Berlin.

While serving in the Army at Camp Upton (Yaphank, New York), Berlin wrote his original version of “God Bless America,” a phrase fervently repeated by his immigrant mother during his childhood. Intended for a military revue, Yip Yip Yaphank, he cut it from the score after Harry Ruby, his musical secretary said, “Geez, another one?” It was World War I and there was an ongoing outpouring of patriotic songs from many of music’s who’s who at the time.

Sung for the first time on November 11, 1938, by Kate Smith, two decades after it was originally written, “God Bless America” got a second chance.

Berlin, wanting to write a peace song, made a couple of attempts, “Thanks America” and “Let’s Talk About Liberty.” But he felt they were coming across too much like a speech. It was at that point he tried “going to the trunk,” where he kept every incomplete idea and verse he had ever written. This was his go-to whenever he was in a songwriting jam.

Berlin found and revamped the old song, making a few lyrical changes, as well as some minor changes to parts of the melody. He was pleased with the revised rendition and immediately began searching for the right voice to make it come alive.

Kate Smith, a vaudeville singer who hosted her own CBS radio show and had entertained the troops during WWI when she was eight, sang the first rendition of “God Bless America” as part of her Armistice Day broadcast.

While the song inspired a majority of Americans, it also received almost immediate backlash. Critics of the song, from pro-Nazi organizations to anti-immigration groups, felt that Berlin, as a Jewish immigrant, should not celebrate the country as his own. And as the writer of two very specific and successful songs, “White Christmas” and “Easter Parade,” he also came under fire for his celebration of Christian holidays.

Others criticized Berlin’s optimism throughout the song, saying it overlooked America’s flaws. Woody Guthrie parodied Berlin when he began writing his now famous “This Land Is Your Land,” originally called “God Blessed America for Me.” Some of the original lyrics made it into Guthrie’s first recording in 1944 but was never released. His 1951 recording, which went mainstream, left out even more.

With the entrance into WWII drawing closer, more and more people began to embrace “God Bless America. And its popularity grew. From Republican and Democratic conventions, to ball games, to numerous types of rallies, it became an anthem to an array of causes.

But the song has continued to takes its share of backlash. When Marc Anthony, of Puerto Rico (an American territory), performed the song at a 2013 All-Star baseball game, racial slurs, via Twitter, included asking why Major League Baseball would pick a “Mexican” to sing “God Bless America.”

In April of 2019, Kate Smith’s reputation came under fire when a baseball fan sent an email to the Yankees notifying them that during her early vaudeville days she recorded songs of a racist nature such as “That’s Why Darkies Were Born” (1931) and “Pickaninny Heaven” (1933). In the early 1930s, when Smith recorded these songs, they were considered mainstream, popular music. And it was common at that time for the performers who sang these types of songs to be larger white women, as was Smith.

This caused quite an upheaval. Many teams who played her version of the song before the start of a game removed it from their lineup, often replacing it with other renditions from different artists. In addition, the Philadelphia Flyers, where she sang “God Bless America” at their stadium in the 1970s, removed the statue they had erected to honor her.

Kate Smith died in 1986 at the age of 79. And Irving Berlin passed in 1989 at the age of 101. Berlin’s legacy lives on in his music, but he also had established the God Bless America Fund in 1940. Royalties from “God Bless America,” along with several other songs of the more than 1,000 he had written, are donated to the Boy Scouts’ and Girl Scouts’ Greater New York councils.

Despite all the controversies, “God Bless America” is still considered one of the most patriotic American songs. Performed by a long list of vocalists and bands, it has endured, remaining a symbol of unity with a variety of meanings for a diverse people for more than 80 years.