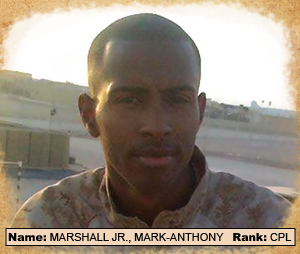 My family is full of service members. I’m one myself and I can personally speak on the success of my generation of service members. I remember my little cousin − Mark-Anthony − while growing. He’s always had a talent for drawing; he was creative and had the best heart! I think of the day he drew the sweetest picture and gave it to me in school to cheer me up. So when he told our family he was leaving for the military―the Marines, at that―we were all a little shocked. I personally didn’t see him going in that direction. But he did. He went, he saw, and he conquered!

When he came home once on R&R, I asked him of his plans for after the military − he told me of a business venture he was getting into; he was drawing logos and designing for local artists and companies. I thought it was awesome he was serving his country and finding time to go after his dreams. This is why I decided others should know that although the military may be your career, you can still achieve your dreams!

So Mark, tell us a little about yourself

There’s so much to say about my background. I’ve had a number of experiences as a child and I will not be able to sum all of them up. As for my childhood background it’s a very interesting one. I was a military brat, so moving was very common to me. Around 5th grade I started to realize my talent for art especially after my teacher put my work in a magazine. I began to place first in all the things I entered, which didn’t sit well with my classmates and lead to the start of a path of jealousy throughout my life, even up to this point. At first I used to think it was my fault. I told a few people the way I thought of my talent and how I should downplay it so I didn’t offend anyone. Many told me I should keep doing what I’m doing and not to worry about who is jealous or doesn’t like me because of my talents. It was something very difficult to deal with because no one wants to be disliked or not talked to because of his or her gifts.

Family has played a big part in my development, both life and business. Very few of my uncles and aunts are knowledgeable about starting or running businesses. They do, on the other hand, know how to work hard and provide for their families. I learned that from them and have applied that to my life and I was happy to recently find out my Uncle Chris started his own catering business.

Violence has troubled my family for as long as I could remember. Funerals have been a familiar event in our family and will always be a part of my overall motivation for being successful. I’ve had ups and downs just like any other child but I accepted it and dealt with it in a positive manner.

Why did you decide to join the Marines?

When I was 11 I told my mother I’d eventually go into the Marine Corps and she was not happy about that at all. My work started to get recognized and many things started to change. I started to have fashion shows and art commissions all over Chicago. Adidas commissioned me to paint for them―several things were going my way. I even had the chance to design shoes for Chicago Bears player Lance Briggs and that ended up in the Chicago Sun-Times. At that time, I had an agent representing me on a number of projects. From the fashion shows, Adidas, to the agent, things were a little overwhelming for me. Nike and EA sports started to get in the mix and I needed to break out.

During that time I also realized I wanted to do something more. As I thought about my current situation and how everything was unfolding, it felt to me the perfect time to go. I wasn’t too old and I did enough in college that I could be successful as a freelance graphic designer. A few thought I was crazy for leaving when I did, but that doesn’t change the fact I needed to go see something different and do a little more.

How was your Marine Corps time?

The experience was amazing. I will not have any regrets about the Marine Corps. I learned a lot from serving. I learned a number of military tactics, physical training exercises, and leadership steps and rules. All of this has added to my success and continued success.

I think everyone should serve at least two years. It will give them a better outlook on life as far as what’s important to them and how to appreciate your freedom once you have it to yourself. Everything has its drawbacks. Going to Afghanistan was an experience but it is very real. Our brothers and sisters are putting their lives on the line for a greater good. Some may not agree with the reasons why we’re fighting in other countries but they should always appreciate their service and respect the lives that have been lost and we’re continuing to lose.

The most memorable thing was the MAIC (Martial Arts Instructor Course.) It is why I will be teaming up with the local cross fit gym in the area to teach self-defense to the college students and others who choose to take part in the classes.

How did you start your own company?

This was a tedious process − I was about 15 at the time. My friend Leon and I started doing this together. I remember it started out as drawing faces and logos for people. We were making a name for ourselves in our small area and we thought, why not make it a business? The company was called “madskillz”. I know, I know − the name is a little immature. People started to take notice and thought it was amazing that two young black teenagers were starting a company. Through time we grew and then − through that growing − we separated. I continued to do projects and later went to college for animation, then switched to graphic design. I found I had more of a passion for that process then the over-demanding process for drawing animation.

While in college, I started designing for local rap artists and little small projects here and there. Later I ran into a few people who said I should start a company and become more professional. With the help of Umair Mamsa, I started my company and it has progressed ever since; I even have work overseas in other countries. Things have really picked up recently as well. I’m branding a new sports bar that will be like the next hooters. I have great clientele from a music group called Lake Shore to a young lady on the rise called Tyomi Morgan. Everything is progressing and a large amount of that is due to the Marine Corps and its core values, leadership traits and principles. Keeping those in mind will make anyone who applies them successful.

Are there any tips that you can give other service members about life, military, or business?

The only tips I can give are to follow your heart and treat everyone with respect. Nothing can go wrong when you keep those two things in mind. For me, I know the Marine Corps values will lead to my overall success. I will not list them all, but Google Marine Corps “Core Values, Leadership Traits, and Principles.” Those three things will aid in my ability to focus and do the right thing when no one is looking.

I would also suggest more people talk to one another and figure out what everyone does for a living. Make the world even smaller. If you’re sitting on a bus next to someone, a train, or a plane start a conversation. You never know who will be able to help you or give you that opportunity. It has worked for me across the board.

I could go on and on about success and the tricks of the trade and what works for me, but I don’t know if the magazine has enough pages for that! Who knows, maybe I’ll give a seminar or write a book that can be downloaded for free? One day…I think.