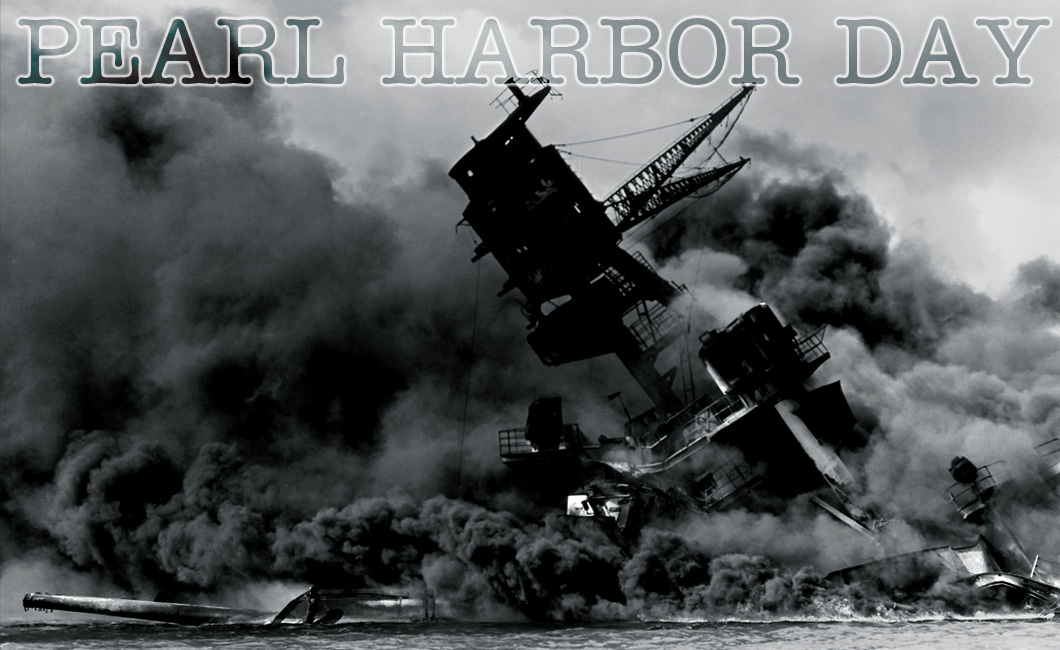 Written by Jenifer Chrisman on December 2, 2015.

DECEMBER 7, 1941, A DATE WHICH WILL LIVE IN INFAMY… NO MATTER HOW LONG IT MAY TAKE US TO OVERCOME THIS PREMEDITATED INVASION, THE AMERICAN PEOPLE, IN THEIR RIGHTEOUS MIGHT, WILL WIN THROUGH TO ABSOLUTE VICTORY.

On Sunday, December 7, 1941, at 7:55 a.m., Hawaii-Aleutian Time Zone, Japanese military launched a surprise attack at Naval Station Pearl Harbor. Lasting only an hour and fifteen minutes, 2,403 U.S. military personnel and civilians were killed and another 1,178 were wounded.

The attack was based on a fictional book, “The Great Pacific War,” by Hector Bywater written in 1925, and the British Royal Air Force’s successful attack at Taranto on November 11, 1940, on the Italian fleet. The success of that battle convinced Yamamoto Bywater’s realistic account of a clash between the U.S. and Japan could become a reality.

Although there were early warning signs of Japanese interest in tracking ship movements, as well as radar identification of a large group of planes heading toward the island on the morning of, they went unheeded. When “Tora, Tora, Tora,” sent by Captain Mitsuo Fuchida in a coded message, was received by the Japanese fleet, they knew America was being caught by surprise.

Due to delay the Japanese declaration of war against the United States was not received until the attack was already underway. President Franklin D. Roosevelt asked for and received from Congress a declaration of war against Japan on December 8. Germany, Italy and Japan, in turn, declared war on the United States on December 11 and the U.S. joined World War II.

More than seventy years have passed since the bombing of Pearl Harbor and, whether actually there or having learned of it through the media at the time, of those who lived through it fewer and fewer remain. Pearl Harbor’s memorials, monuments, museums and Pearl Harbor Day (every December 7) will someday stand as the only reminders of the day World War II was brought to American shores.

Pearl Harbor Day remembrances include flying the flag at half mast, memorial services, wreath-laying, speeches, luncheons, stories, recollections and education activities. But what more can be done for all those – no matter where or when they served – who dedicate(d) their lives and may pay the ultimate sacrifice?

In 2013, from October 1-16, the federal government of the United States entered a shutdown, curtailing most routine operations due to funding. Of those federal employees, approximately 800,000 were indefinitely furloughed and 1.3 million were required to report to work without knowing when they would next be paid. During that time many museums and national parks were shut down across the country, while memorials and monuments lay neglected.

One of those was the Arizona Memorial at Pearl Harbor, which is the resting place of more than 1,000 marines and sailors who died during the attack.

Army medic Josh Stone noticed its neglected appearance and decided to do something about it. On Sunday, October 13, 2013, he put out a call for volunteers on Facebook. Monday morning, “armed with lawn mowers, trimmers and rakes, and good intentions,” according to Hawaii News Now, dozens of service members, spouses and their children showed up to clean it up and honor those who lost their lives.

Josh Stone and his cadre of volunteers know their sacrifice should not be forgotten. And they knew what more could be done to remember them. What can you do?