Should They Serve Before They Lead? 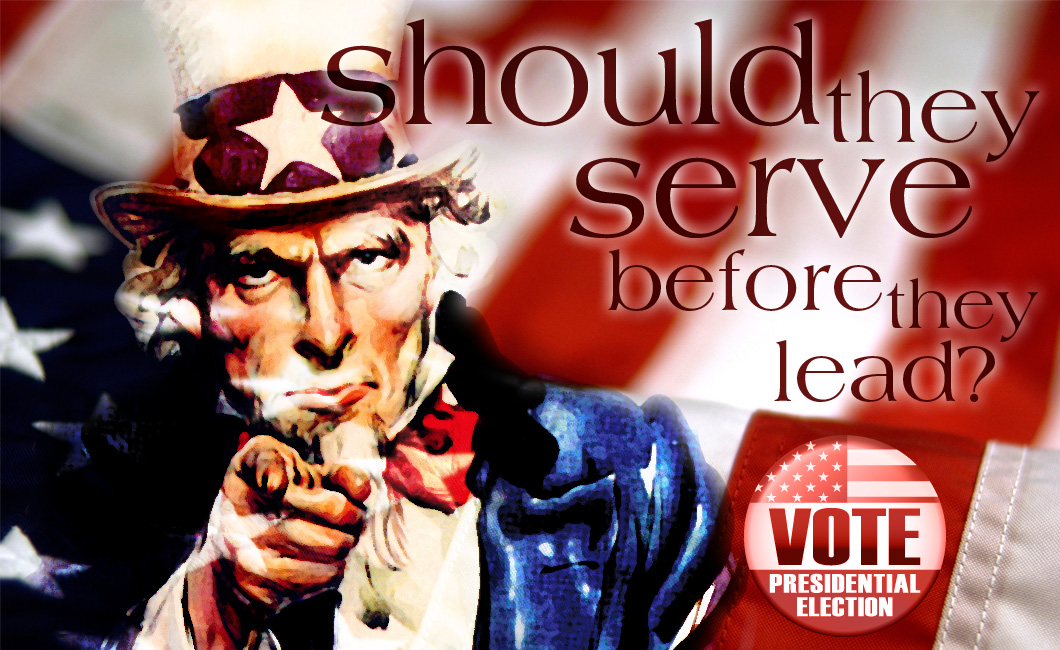 The United States military, both part of and separate from civilian America, has its own history, traditions and culture. Its most fundamental beliefs and tenets – brotherhood, courage, determination, discipline, duty, fortitude, honor, integrity, loyalty, morale, pride, respect, sacrifice, selfless service – make it a unique and honored part of American society.

Major General James Fry acknowledged, “There is no type of human endeavor where it is so important that the leader understands all phases of his job as that of the profession of arms.” For the thirty-one of forty-three presidents (listed in the story They Served Before They Led, culture.mil), who served in the United States military before their presidency, they intimately learned and lived, to one extent or another, the truth of that statement.

As part of the president’s executive duties, he (or she) holds the role of Commander in Chief:

Article II, Section 2, Clause 1
The President shall be commander in chief of the Army and Navy of the United States, and of the militia of the several states, when called into the actual service of the United States.
– United States Constitution, Executive Branch
Signed in convention September 17, 1787
Ratified June 21, 1788

Although balanced by the Constitution’s grant that Congress alone has the authority to declare war, the president is, by definition, the supreme commander of the United States’ armed forces. In the past, including Vietnam and Korea, presidents have sent troops into battle without an official declaration of war.

Former president and General of the Army (5 Stars) Dwight D. Eisenhower declared, “I hate war as only a soldier who has lived it can, only as one who has seen its brutality, its futility, its stupidity.”

While there have been presidents in the past who have not served in the military, should the same be true for our presidential future? Can a president, who has never personally lived the unique history, traditions and culture, whether in peacetime or war, adequately and effectively lead those who defend our freedom?

The past is the past, and there is no going back. But should our future presidents be required to serve in the military? And, if so, should they have to serve a minimum number of years of enlistment? Either way, why or why not?

We would love to hear your thoughts. Just remember, while this is an open forum, everyone has the right to their own opinion.